Over the next several days, MobileGenealogy.com will be undergoing several upgrades as far as software and content, and will be regularly updated after that. After the updates are finished, you’ll be seeing a lot of activity here. Apologies for being away – being a father and juggling a few other … Read more

Cross-posting this from MacGenealogy.org (the event starts at 12pm Central, 1pm Eastern, 10am Pacific): MacRumors has a great list of websites covering today’s Apple iPhone/iOS event. AppleInsider is also live blogging it. You can follow the MacRumorsLive Twitter as well as these sites: All Things D Arstechnica CNET Engadget Loop … Read more 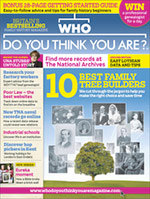 The Who Do You Think You Are Magazine (behind the popular genealogy TV series/documentary) is running a huge sale on back issues of the magazine through the iPad/iPhone/iPod touch Newsstand app for $0.99:

Who Do You Think You Are? – Immediate Media Company Limited – Apple iTunes Store

I believe the back issues stretch all the way back to April of 2012, at least going by what I see in Newsstand.

There is a also a free 1 month subscription trial, which includes the latest issue. The app itself is free.

GoodReader for iPad 3.18.0 has been released, and the main improvements focus on handling files over a network, including shared files from PCs/Windows-based computers. The Dropbox support has received a large update – there is no size limit of files that can be uploaded through Dropbox.

GoodReader is an Adobe Acrobat/PDF reader for the iPad, but it does quite a bit more than that, as it can handle TXT and images as well as various word processing formats (possibly even audio/video, but I’ve never tested that aspect). It’s one of my top-5 non-genealogy specific apps on my iPad as I have a lot of genealogy-related PDF files that I’ve accumulated over the years, and it’s very easy to keep them organized, and it doesn’t choke, even on the larger ones.

Heredis version 1.0.1 for iOS Universal (iPad, iPod touch, iPhone) was released last week. The updates include better synchronization and GEDCOM importing, improved help, and stability fixes. It’s a free companion app to the desktop versions of Heredis for Mac and Heredis for Windows, but it also works with GEDCOM … Read more

We use cookies to ensure that we give you the best experience on our website. If you continue to use this site we will assume that you are happy with it.OkPrivacy Policy