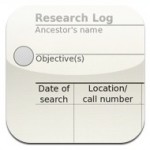 Research Logger 1.1 from Spencer Hall has been released. Research Logger is a fairly new app – it came out at the beginning of July. It’s only taken a short amount of time to see a major new release – universal support has been added, allowing Research Logger to run in the iPhone 4 and iPad’s native resolution without upscaling.

So what is Research Logger? It’s an iOS app for genealogists to help keep track of their genealogy research – research that has been completed as well as research that needs to be done. It can take the place of a small notebook that many of us carry around to jot down notes and to-do lists.

Research Logger allows you to maintain separate entries for each ancestor, along with todo lists.

Research Logger can be downloaded for $0.99 (US) through the Apple iTunes App Store

↑
We use cookies to ensure that we give you the best experience on our website. If you continue to use this site we will assume that you are happy with it.OkPrivacy Policy